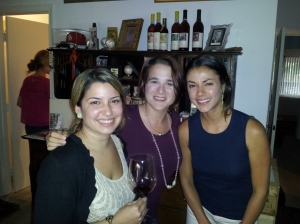 When I first began getting involved in my schools wine program, I began to hear of what was called, “The Villa.” I heard that one of our professors, Paul Rudolph, a certified Bordeaux specialist, and one of my favorite teachers, would host an annual gathering at his home, The Villa, for only a select few of his students and colleagues. I had taken most of Paul’s courses because I loved the way he taught. Most students shied away from lecture oriented classes, but I craved the days when I would sit in on his three and a half hour class and listen to him speak of wine, only stopping to open bottles. I filled page after page of valuable lessons on regions, styles, fermentation processes and history. His profound knowledge and infectious enthusiasm always left me wanting to learn more from him, and when I began to hear of these gatherings, I wished that I could be a part of it.

A few weeks ago I was shocked, and then euphoric, to open my email and find an invitation to The Villa; to have an intimate night with top colleagues, students and Paul. We were instructed to bring a wine in a brown bag and confirm our attendance. My excitement grew when I found out that a few other of my wine friends, or my wine family as I call them, would also be attending. We did not share the wines that we would bring but we definitely shared our excitement. We had to think long and hard about which wine we would present to these super tasters. It was nerve-wracking but very interesting to pick the perfect wine. 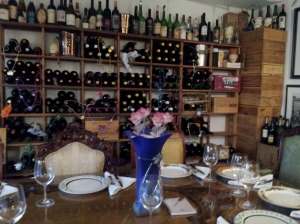 The day of the gathering arrived, with my wine in bag and my friend Sara with me, we made our way to The Villa. We stopped at a wine shop where I purchased three cheeses, the stinkiest ones that I could find. Paul has always stressed how much he

loved stinky cheese and I eagerly wanted to impress him in any way I could. We were the first ones to arrive and I was amazed with how much space the love of wine could occupy. You could literally feel Paul’s passion the moment you walked into the home. Wooden cases and bottles took up every inch of space and when we walked into the kitchen, and dining area, food was there to pair with it. The ambience was intimate, with touches of French culture. Pesto pasta sat in a large ceramic bowl and every spot on the table was covered with glasses and decorative plates. On the counter sat four decanters that looked like they had been used and reused for decades. They were numbered and filled with wines that varied in different shades of rust. I looked behind the table and saw floor to ceiling crates loaded with wine. I asked Paul which wines those were and he smiled and said, “The ones that are ready.” While we waited for the others to arrive, he opened champagne that he told us he’d had for twelve years, a Pol Roger Extra Cuvee De Reserve. The wine was a deep canary color and had an intensely tart marmalade taste. It reminded me of eating dried apricots at the beach, with the sea spray filling the air.

Soon, everyone else arrived and we began tasting the bagged wines. We talked and

laughed but mostly I paid close attention to Paul and Harry, a friend and fellow lecturer at our school. I have a good relationship with Harry and have attended many of his tastings but I have never seen him properly taste and critique wines so I was very impressed with his knowledge. Paul and Harry led the tastings of the wines and I took notes. They properly identified most of the wines, something I hope to be able to do one day. We ate and spoke and tasted more wine, discussing the regions and how and why we arrived at our conclusions. When I presented my wine, I was excited but nervous at the same time. I did not want to disappoint and it seemed very easy for Paul and Harry to figure us out. We took the first sip and the immediate consensus was chocolate. Deep rich chocolate with fresh red berries and a touch of coffee. They asked me a few questions, but were unsuccessful. When no one could correctly identify my wine, we unbagged it and they were very pleased to see that I had brought an Israeli Malbec, from Tishbi Estates. After my wine tour in Spain, I visited Israel and went to the Tishbi winery and tasted their incredibly rich Malbec. Luckily, it made it all the way home and ultimately, to The Villa.

After we finished tasting our wines, what I will forever call “the moment” happened, Paul walked over to those curious decanters and brought the one labeled “1” to the table. I could have never expected what would be waiting in that decanter.

He poured himself a glass and passed it around and we all poured a little bit into our glasses. When I tasted the wine, I knew that it was something different. It was a deep rust and had an extremely expressive nose, something I wouldn’t expect from an aged wine of that color. The nose was smoky with dark deeply stewed cherries and plums. As I sipped, I experienced a balance of fruit with spice and some oak and little tannin. It was smooth in texture and finished warm with spice. Harry was glowing with excitement but not saying anything, just enjoying it, savoring it. Paul pulled out a bottle and informed us that we had just tasted a 1982 St. Julienne Chateau Ducru-Beaucaillou. The label was worn and had an incredible image of St. Julienne. This second growth from the Medoc expressed the terroir perfectly, showcasing the gravel and “beautiful stones,” what Beaucaillou translates to. Harry stood up and thanked Paul in a toast. I reached for the decanter. My first thought was, “If this was the first decanter, what could possibly be in the other three?” I was beginning to see how special this night would turn out to be. A short while later, he presented the second decanter. As we poured, I tried to think of what the next wine could be. Would Paul take us to the right bank? I inhaled deeply and received a vegetal, smoky and sweet aroma, like molasses. As I sipped, I tasted spice and softer tannins that the Ducru. The acid was a bit subdued but the fruit was elevated with notes of raisins, cherries and a subtle spice on the back of the throat. It was expressive and loud, very much alive.  This wine was a first growth 1978 Chateau Lafite Rothschild 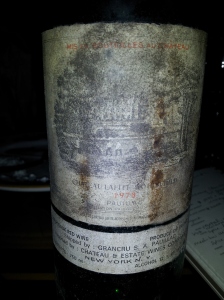 Pauillac. Its jamminess and minerality surprised me and I was impressed to find myself thinking that this wine would and could get better with time. It’s classic Medoc style and level of quality was overwhelming. Needless to say, we sat with this one for a while. Paul informed us that he had been decanting this wine for about four hours before presenting to us. By the time the next decanter was brought out, I was feeling a bit over privileged. What had I done to deserve tasting these wines? The fact that this was something I would never be able to do again began to slowly sink in, and I decided to take minimal notes and just immerse myself in the moment. The third decanter made its way around. I smelled stewed fruit again, but with a bit of wood that presented itself aggressively. I thought oak, but then decided on cedar or pine. Another note was evident, something smoky and sweet, but I could not place it.  I also got a bit of blackberry on the nose. This wine was definitely wilder to me, with more earth and a higher tannic profile. The fruit was presented well and complemented the nose, with cherry and blackberry. When Paul unveiled the bottle, it was a 1975 Chateau Latour, a first growth. It amazed me that although it is in such 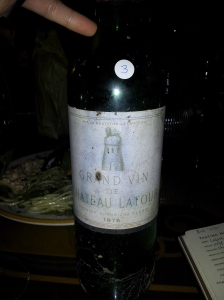 close proximity to St. Julienne, it was so different.  Harry solved the mystery of that unknown aroma by saying that cigar box note was a trademark characteristic of a Latour. We all stood and thanked Paul for his graciousness in sharing these one of a kind wines with us. I was still in shock and felt that I could never repay him for this. For everything.

As the night went on we tasted and ate and the whole evening felt as if we were all removed from our lives and placed into some alternate wine universe with the Oz-like Paul. It was magical and surreal. I felt thankful for this passion and the path that I had decided to take and, although I knew it was going to be difficult, I felt that this specific kind of difficult was much better than others. I still feel that way today. Paul went on to give us the tour of The Villa, sharing his “label room,” a bathroom with large framed labels from places and Chateau’s I have only dreamed of visiting. He showed us the guest room, which was, strangely littered with nickels and had a bathroom called the “sticky room,” because of the abundance of Sauternes and other Botrytis wines. When the evening was coming to a dreaded close, he set the fourth decanter on the table. How could it get better than what he had already given us? We finished that magical night with none other than what I had first remembered from one of my earlier classes with Paul, when we visited Portugal. “If you ever get your hands on a 1977 Port, don’t ever let it go.” That Port was dripping with molasses and burnt caramel. I tasted a symphony of apricots, spices like clove and cinnamon with a finish that lasted days later. 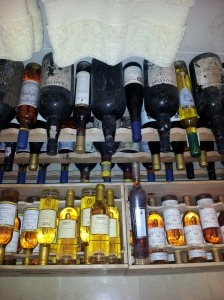 The port was the perfect description of that evening at The Villa, something that would, and will linger forever in my memory. It will stay in my thoughts and in my heart for a long, long time and my appreciation for wine and the people it brings you will never go away. Wine is more than an age-old beverage, it is a gathering, a moment. That night at The Villa was a gift that I will take with me everywhere I go for the rest of my life. It was not just the wines, but also the faith that Paul bestowed in us, to share his most prized and intimate collection of wines, showed me that he believed in us. I hope to one day be able to invite him over to my home and present my most special wines in the same unselfish and passionate way he did for us. I took with me the lesson that wine is only special when you have people to share it with. Long live The Villa!

Written by and images from Nicole Linares

Nicole Linares is a student at the Florida International University’s Chaplin School of Hospitality, USA, an active member of her schools Wine Academy and budding wine writer

One comment on “Nicole Linares blogs: Meeting of the Wines”